Reaction to our current story arc (which starts here) has been fascinating to see!

Thank you for the many kind (and even the few less-than-kind) emails. And for your own sick elephant suggestions — though I am perfectly well stocked, believe you me.

I know this has been going on for a while. And I assure you that this plane is on a gradual and appropriate glide slope to its narrative conclusion.

HOWEVER, if you’d like to parachute out now, I UNDERSTAND. Put your email into this form and I’ll let you know when this storyline is over: OR, if you happen to be of the opposite opinion, you can always put your email into this form: What does this accomplish? WHO CAN SAY. Maybe, at some undefined future point, elephant fans might get something special in their email! THE WORLD IS UNCERTAIN.

Our Kickstarter campaign for the new book is proceeding apace!

Thank you to everyone who’s reserved a copy so far, I am very excited for you to get it in several months. If we beat our funding goal, any extra money raised will go toward making everyone’s book longer, with more comics included – so please spread the word!

The new book will not, alas, contain any sick elephants; the contents come from a bit farther back in the archive.

(Though if you’ve read the past books, you know that Norbert, the hero of the present story arc, has made a small appearance in each.)

But here’s one thing I am including: over on the campaign page, there’s a link to a free download of my last book, Emperor of the Food Chain: This is so interested parties can see firsthand what a Wondermark book is like, without me giving away too much of what’ll be in the new book!

You can download the book even if you don’t back the project — it’s just a “thank you!” from me for visiting the campaign page.

I’ll do a question & answer roundup in a future blog post!

And if you see someone else posting a question you’re interested in, like it (in the FB comments) or upvote it (in this post’s comments).

(Note: a few years ago I also did a brief AMA on Reddit. But maybe my answers to those questions have changed since then, WHO KNOWS??)

Happy Thanksgiving weekend, Americans! I’m thankful for ALL OF YOU. I mean it sincerely!

Submit a question to Ask Gax! 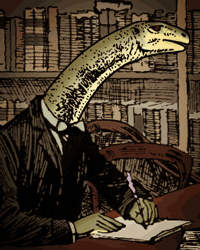 Gax has informed me that he’s ready, after a period of recovery, to once again “lend [his] neck” to the task of answering advice questions from humans.

You may recall that he has done this, on occasion, before.

He has expressed to me a particular interest in questions “that don’t paint me as some mysterious Other to be patronized”, which I take to mean that he’s starting to reconcile himself to being on Earth for the rest of his natural life. Which, I don’t know, could be centuries; he won’t give me any indication of his lifespan. (Why would you, I guess.)

If you have a question for Gax, leave it as a comment on this post, and I will forward them to him to choose from! You can look back at his previous columns if you want to see the types of matters on which he feels himself qualified to advise. This year (come April) will mark THIRTEEN YEARS of me posting Wondermark comics on this website. This website is nearly in EIGHTH GRADE. It will soon be learning ALGEBRA.

I don’t want to wait until April to celebrate, though — we just hit comic #1200, and that’s a nice round number.

So I’m doing a special book sale for THIRTEEN DAYS, where you can get any three of my books for eighteen dollars total! It’s the THREE-’TEEN sale. That’s a terrible name for a sale. It is no longer called that.

If you’ve been meaning to complete your book collection, now’s the best chance you’ll have for a while. If you haven’t picked up a Wondermark book before, what a great time to do so! I am very proud of all my books. You can read more about all the different titles here!

All eight of the books pictured above are included in the sale — four strip collections, two themed collections, a book of drawings, and a big thick novel. (The latter two are available digitally, as well.)

I hope you take this opportunity to fill a bookshelf, or a slab of giftwrap, with some cool books!

BUT! THAT’S NOT ALL… It’s ALSO the anniversary of Machine of Death!

The original Machine of Death comic appeared on Dinosaur Comics in December 2005.

And it was around this time of year in 2006 — a little while after the comic first ran — when Ryan, Matt, and I (along with some other folks on Ryan’s forum) first started talking about how cool it would be to put together a book of short stories.

That was ten years ago! Since then, we’ve put out two books and a card game…And you can grab any of them during this sale for JUST TEN BUCKS EACH.

The game normally retails for $35 (and the expansion set for $45), so this is a…killer deal. Get it? Because it’s called Machine of Death.

If you don’t know about Machine of Death yet, this video will summarize it for you in thirty seconds:

It’s pretty great stuff. (You can also get the MOD books digitally, if you prefer; or, here’s the entire first book in audio form as a free podcast.)

It would probably make more thematic sense to run this sale for ten days, but since the Wondermark sale is thirteen days long, we’ll call this one thirteen days as well.

You can even patronize both sales at the same time! They, and many other cool things, are all on offer together over in my TopatoCo shop. Yesterday I introduced the Cast Card Subscription program, via Patreon, in which I will produce and send you a cool limited-edition plaque every single month.

In that post, I wrote “Moving forward, there will be other ways to get other Cast Cards, too” besides the subscription.

Like this, for example! Today, in addition to the Patreon subscription cards, I’m issuing a new “Library Ace” cast card, pictured above.

There are two ways you can get this card:

FIRST METHOD: If you own five or more Wondermark books, you are a Library Ace right now! You qualify to get one of these cards, for free, to commemorate your great achievement!

To claim your card, take a cool picture of your five (or more) Wondermark books. They can be any five from the picture above, or older ones that are now out of print. (I’m pretty sure I’ll recognize them.) I wanna see what you got, and show your collection to other people too!

Then: tweet your picture with #libraryace, and tag either @malki or @wondermarkfeed. (And make sure you’re following one or both of of those accounts, so I can DM you your claim instructions once I see your post!)

That’s it! Just take a picture of the books you already have, and share it with me. I’ll send you the cast card as a thank-you for being a cool person with good taste in books!

If you happen to order books in this sale, and you end up with at least five books total — between the books you’re ordering, and any books you may already have at home — then congratulations, friend: you’re now a Library Ace!

You don’t have to wait until you get the books in the mail: feel free to forward me your TopatoCo order confirmation email (to dave at wondermark dot com) — and if you like, attach a picture to show any other books you’ve already got, so that everything adds up to at least five books overall.

When I get the email, I’ll share your picture on Twitter (if it’s super cool) and add you to the ACE STACK at once.

This promotion, like the others, will run for THIRTEEN DAYS! The sales, and the Library Ace claim period, will all end on MARCH 9. Beware the nines of March!!

…And of course, there are still a few days left to join the cast card subscription list in time to claim February’s Patreon-exclusive card. A few people have signed up so far, which is super great — I kinda like the idea that only those few people will get that month’s card, which makes that card super rare and thus extra cool for those folks!!

I love running sales like this when I can — I just want to get this stuff into your hands, and I know not everyone can afford to get all the things they might want right when they first come out. So I’m really happy to do discounts and promotions when I can, and I hope you take advantage of them! Hooray for books and cool books and enjoying books!!

Wondermark AND Machine of Death – Super Sales on TopatoCo

And don’t forget to tweet me your #libraryace picture! Last Halloween I posted a comic featuring the above character, Plabecca, in costume as the Sexy Complete Works of Dickens.

This Halloween, reader Jen created her own version of this costume — with the complete works of Conan Doyle.

Y’all, when I have a high-concept costume, I don’t fool around. #halloween #halloween2015 #mystery #books

I mean, you’ll be able to get them later, too… BUT WILL YOU THINK TO?? Stock up now!!