I’m at Comic-Con right now, and I’ve been doing a fun new thing I call “Roll-a-Sketch.” Simply put: I wrote down a list of adjectives and nouns (such as “underwater”, “ninja”, “backhoe”, “jam jar”, etc.) in columns. Then, a person chooses a column and rolls a die to randomly select one of the words — then does it again, to select a second word.

Then the fun part: I draw the combination, like this vampire helicopter: 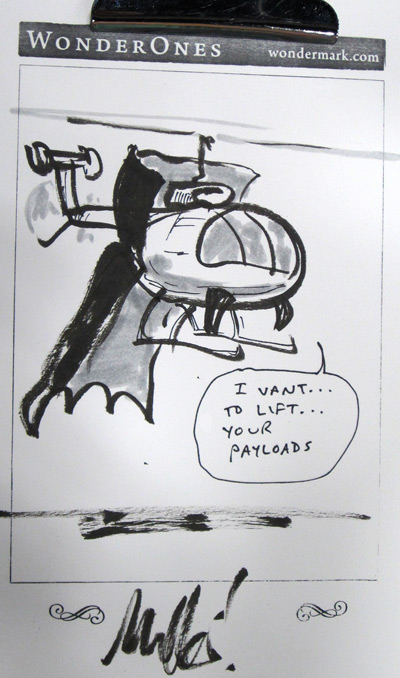 For a few extra bucks the person can even roll FOUR times to generate a SUPER-COMBO like this Victorian submarine helicopter bulldozer: But my favorite so far has to be the boxing rhino space tank: And the best part is, the result is a fun sketch that the person gets to take home and keep!

So if you’re at Comic-Con, come by booth 1229 to roll for your own sketch! I’ll likely also be bringing this to other conventions later in the year as well — heck, I’d do this at the dentist’s office, if they let me. AND WHO’S TO SAY THEY WON’T??

This entry was posted on Thursday, July 12th, 2012 at 11:59 pm and is filed under Blog. You can follow any responses to this entry through the RSS 2.0 feed. Both comments and pings are currently closed.